You are in: Home / All KS3 Resources / General Issues at KS3 / Planning & Teaching KS3 History

What is it about? 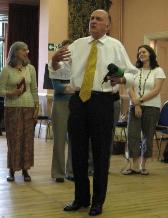 Wars crop up a lot in KS3 History.

Everyone does the Norman Conquest. Many people cover the Crusades. Many Y9 courses are full of wars. But can pupils link any of these wars together to think about common patterns or differences or to use what they have learned before as a springboard to investigate a new war?

Several obvious questions/issues can be traced across time:

All these could be studied in the contexts of the Norman Conquest, Crusades, Napoleonic Wars, World Wars etc etc etc. the trouble is that this approach gets very bitty and very lengthy. Is there an even bigger story that can hold your coverage of wars together and perhaps be even more relevant to today? One possibility is to focus on attitudes to war which is the product of the four sub-questions above. A very broad conclusion is that since the mid-twentieth century attitudes to wars have diverged – with more obvious opposition but also wars have often been fought (perhaps for the first time on this scale) as a means of stopping greater evils.

Using what you do already

Does this mean turning everything upside down? It obviously depends what you do but a little fine tuning of, for example, the Norman Conquest, would fit neatly into the questions above. Elsewhere on this website there are activities on ‘The events of 1066’ (the hairdryer activity) which is about causes and motives and ‘Je suis le roi’, which is essentially about the effects of war. When I first devised these activities I saw them in terms of the Norman Conquest as a single event but now they can set benchmarks for ideas about war.

Out of ‘The events of 1066’ can come an understanding of motives for fighting and hence the reasons for war – at the moment it focuses on the motives of leaders and their immediate supporters but could easily be widened to take in ordinary soldiers. It’s about power, hopes for wealth, defending what you’ve got against invasion, a belief that you’re in the right, a sense of adventure – not a million miles from the reasons behind many later wars. Why did men join up in 1914? Some of the answers were the same in 1066.

Similarly ‘Je suis le roi’ introduces a range of effects of war – change in rulers, loss of land and property, destruction, rebellion, refugees, humiliation, changes in language – again features of wars throughout History. So you can use your existing work on the Norman Conquest to get this theme started – and if you do the Crusades you can compare and contrast motives and effects of 1066 and the Crusades – and through that think about attitudes to war in the Middle Ages – do they seem to be the same as attitudes today? How are they similar and different?

The danger is getting bogged down in lots of little wars but it is possible, if you wish, to cover a lot of ground quickly. One technique is described in the activity 'The Big Story of Conflict' which outlines the geographical spread and causes of many of the wars Britain took part in between 1066 and 1900 - all in one lesson! This activity is particularly useful because it provides an outline link between depth studies on individual wars (of your choosing) such as the Norman Conquest of World War One.

Another technique is the living graph as used in ‘Wars in the Middle Ages – what was going on?’ This activity covers three wars in one graph – the Crusades, the Hundred Years War and the wars in Britain (mostly Edward I’s). Who won? Why were they fighting? If we developed the colour-coded cards we could bring out effects as well. If you feel guilty about missing out Crecy and Agincourt, Hattin and Saladin but haven’t got time to cover them in depth, this kind of activity may be useful.

Similarly you could tell the story of how the geography of European wars changed after 1500 with a physical map. I haven’t found the time to create the cards for this yet but it would involve creating a set of war cards, colour-coded per century, and placing them on a map of the world. This would show very visually how widespread were the wars fought by European countries by the 1700s – a very different geographical pattern from the Middle Ages.

The problem with the middle bit of History (known to most people as 1500-1900) is not being repetitive – the motives for wars expand (more are about religion, trade and empire) and the effects are wider-scale but that’s very big picture stuff. If you’re looking for a different way into wars 1500-1900 you might consider asking ‘which wars should be studied?’ ‘Which wars would you choose to put in the National Curriculum?’ Trafalgar and Waterloo? The Armada? Ask groups within the class to report back on a war and why it might be worth studying – including wars Britain lost (Dutch invasion of Medway in 1660s) and the Opium Wars?

Of course if you do a two year KS3 you probably don’t have a Year 9 problem – but you still have to find your way through the 20th century up to today and avoid turning the last part of your KS3 course into a mini-GCSE Modern World History strand. This is going to happen if you think in terms of mini-studies of World War One, World War Two, the Cold War, the Middle East, Terrorism. Such an approach will squeeze everything else out. What’s probably needed is an entirely different structure – so here are a couple of possibilities:

A rapid outline of wars since 1900 and then build from that a couple of depth studies, such as:

1. Why did troops keep fighting despite the terrible conditions in WW1?

2. Does it matter how WW2 is presented and interpreted?

3. Why is it so difficult to establish peace in the Middle East?

For ideas on how to tackle a rapid outline of a single war see Dale Banham’s excellent activity on World War Two [ click here ].

Alternatively start with an outline, then follow-up with case-studies which draw on examples across the century and also link to today and inform pupils about their world, such as:

1. Why have people joined up – and others haven’t?

2. Why have civilians become targets in warfare?

3. Why do some people feel driven to terrorism? (begin with Princip?)

Another question that would allow you to range widely and also links the past very much to the present is ‘Why has Britain been involved in so many wars since 1945?’ – a question well-illustrated by the huge number of names on the new National War Memorial near Lichfield – see

Frameworks, Themes & What's in it for Students?