You are in: Home / Chronological Understanding / Diachronic Dancing

I am grateful to Alan Kelly for agreeing to the inclusion of his article on the site.

This article has strong links to much current work on chronological understanding, including my own article, Time for Chronology?

A similar activity to that described by Alan can be found in ‘King’ Cromwell? by Andy Harmsworth and myself.

The importance of Alan’s article lies in the clarity with which he explains the value and importance of ‘long view narratives’ and provides an accessible introduction to Denis Shemilt’s ground-breaking thinking on diachronic frameworks.

Over the next year I hope to add more material to the site on chronological understanding and diachronic overviews. The new SHP KS3 series makes extensive use of these ideas, providing diachronic activities which set depth enquiries into context and link topics into long view narratives across British and world history from 1066 to the present. These diachronic activities will focus on Stages 2 and 3 of Shemilt’s taxonomy described below but may also offer the opportunity to accelerate some students’ understanding into Stage 4.

Outline of a workshop given by Alan Kelly at the Euroclio conference in Cardiff in 2004 and published in the Welsh Historian, Issue 33, Autumn 2004.

Creating the Ultimate Overview for 12 year-olds

This workshop was concerned with the ambitious notion that 12 year-olds deserve more than 'timelines' for providing narrative frameworks of the past. It was inspired by ideas developed by Denis Shemilt in The Caliph's Coin , Chapter 5 of Knowing, Teaching and Learning History, by Stearns, Seixas and Weinberg (NYU 2000).

The starting point was to ask how 12 year-olds in Britain tend to construe the past. Over the last 14 years or so (since the launch of the National Curriculum), they have learned about the great events of the 16th and 17th centuries, they know how and why interpretations of such events differ and they know that evidence is problematic. What they have not learned, however, is how to handle the past as a whole. Hence, few of them are able to map the past in any meaningful way , or to offer coherent, long-term narratives. A-level students are now expected to deliver 'synoptic' narratives (though the concept is still dimly understood); GCSE pupils have long been used to the Study in Development (though its full potential is rarely exploited); and teachers are gradually breaking free from the 'bore-hole' tradition of British history teaching. Key Stage 3, however, is still relatively virgin territory. There is an expectation in the requirements that younger pupils should have some kind of 'map of the past', but the presumption seems to be that this will somehow 'emerge' from a 'coverage' of relevant 'content'. The opening proposition was that 12 year-olds deserve something better.

Where this is currently attempted, pupils tend to make use of 'timelines', usually comprising lists of notable events. But these have no more narrative logic than an alphabet.

Why should 'D' follow 'C'? Timelines, of course, are not entirely without meaning. Through timelines, pupils develop an idea of what happened and when (chronology). They may also develop ideas about duration and simultaneity, or come to understand in a simple sense that more than one timeline is possible – male and female; rich and poor etc. However, timelines are limited in the sense that their components are largely inactive – they have little explanatory function. Pupils reciting events in a timeline cannot distinguish between 'what happened' and 'what was going on' – between what Braudel distinguished as the froth of surface ripples and the deeper, silent, more powerful movements of the tide.

Shemilt likens this to watching a movie trailer without having any concept of the movie. Pupils can construe the separate episodes but not how each relates to the whole, or how the whole can be more that the sum of the parts. In other words, we have too many truffle hunters and not enough parachutists! (the ubiquitous Euroclio umbrella proved a useful visual aid at this point – to demonstrate the parachutist's perspective on the terrain that he overlooked!).

What does 'diachronic' mean and what does it have to do with dancing? Two words are useful here: ‘diachronic' , meaning 'over time' and ` synchronic', meaning 'across time', or 'at the same time'. Hence a diachronic overview is one that looks over time – taking a long view of history, for example a period of 200 years or more; and a synchronic overview is one that looks for links and connections occurring at a particular time, more or less simultaneously – for example, a study of various facets of the Industrial Revolution. Both approaches to 'the big picture' are equally important for providing pupils with a usable map of the past. When working with narrative frameworks of these kinds, pupils realise that specific detail is less important than broader patterns of development. The essential cognitive motion is that of gliding, or dancing 'over the years' – Hence the workshop title.

What might diachronic frameworks look like in practice? Shemilt suggests four 'stages' amongst pupils aged 11-19. As with all such taxonomies, distinctions within them need to be treated with considerable caution – they represent no more than tentative assertions, or groupings of ideas at this stage and certainly should not be confused with 'attainment levels'.

At this stage pupils will produce 'timelines' but may go on to consider more than one perspective (local/ national; male/female; rich/poor) or characteristic (overlapping developments). Such narratives can provide interesting comparisons but they are essentially inert – lacking explanatory power.

These are causally rather than chronologically ordered narratives that enable pupils to distinguish between 'what was happening' and 'what was going on'. They also reveal significant changes and continuities, which pupils characterise as 'trends', 'turning points' etc.

At this stage (roughly corresponding to KS4) pupils recognise that narratives can consist of more than one strand and that developments in different strands can vary in either speed or direction. For example, developments in medicine have been divided into 3 strands representing pharmacology, surgery and public health, with developments occurring at different speeds for different reasons in each strand.

Students at this level recognise that developmental narratives are only as good as the evidence on which they are based, and that more that one narrative is therefore possible (a notion most obviously represented by the 'Whig' and 'Tory' narratives of British history). It follows that the significance of common events within such narratives – for example, the Great Reform Act – will vary according to the narrative of which it forms part.

The main workshop activity then focused on 'Stage 2'- and the kind of developmental (diachronic) narrative that might be possible with 12 year-olds. The presenter promised all assembled that within 30 minutes they would all be able to explain the main developments in British history between 1485 and 1688! It sounds ambitious, but if the cognitive moves are deliberately taught, why should it not be possible to achieve?

First, the audience was shown a typical timeline – pictures of kings and queens of England and famous events, arranged in chronological order with brief information about each but no connective commentary. They were asked what they knew, understood or could do as a result of viewing the timeline. Some were able to recount information about separate rulers; others knew that Edward VI followed Henry VIII; someone announced that Charles I was executed in1649.

Next the audience was divided into small groups and each group was given an A4 sheet containing the frame for a graph. Along the bottom were years between 1485 and 1688 marked off in intervals of 10 years. The vertical axis defined a 'power rating' and was calibrated from 0-l0. Then two sets of information cards were given to each group, the two colours representing Crown and Parliament. Each card was dated and contained information linking the event described to both prior and subsequent developments. In addition, each card contained a power rating between 0 and 10. By cross-referencing the dates and the power ratings, the groups were able to 'plot' a graph showing developments in the power of both Crown and Parliament 1485-1688. Coloured 'dots' were used for this purpose and joined together using pencils and rulers. 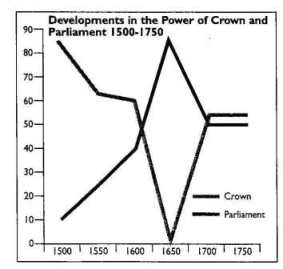 When groups were then asked to describe what they understood from the graph a very different set of answers were forthcoming. For example, one group was able to explain that the power of the Crown gradually declined as a result of a combination of personal failings, financial shortages and challenges to the royal prerogative; meanwhile that of Parliament gradually increased due to 'the power of the purse', religious developments and a growing sense of its own rights and privileges. For a dramatic period in the mid-17th century, the power of the Crown disappeared altogether and that of Parliament was unchallenged (power ratings of 0 and 10 respectively). Finally, monarchy was restored but with its powers constrained by the Bill of Rights and Glorious Revolution. There was disagreement, however, on what represented the most significant development. One group opted for this violent reversal initiated by the execution of Charles I; another argued that the longer-term trend towards convergence was most significant – the English Revolution merely a 'false dawn'. Some of the ideas expressed were simplistic, or perhaps not quite fully formed, but this was impressive on half an hour's acquaintance.

Two further practical points need to be made. First, 'power ratings' are artificial constructs that allow the graph to be constructed. There is clearly an element of artificiality in this, but the end justifies the means. Depending on the question being asked of the narrative, these might be called 'change factors', or 'growth indicators', or whatever. Second, the exercise as presented in the workshop would have been undertaken at the beginning of a study. It could equally have been undertaken at the end of a study but in this case the pupils would have provided their own power ratings – in which case, the narratives produced by different groups could be compared and discussed. In this way, younger pupils might have an initial glimpse of the final stage of Shemilt's taxonomy – awareness that more than one narrative framework is usually possible.

So we all went dancing in diachronic time. Some did a quick step, some a tap dance, and others took a longer, slower glide. But we all got there in the end.